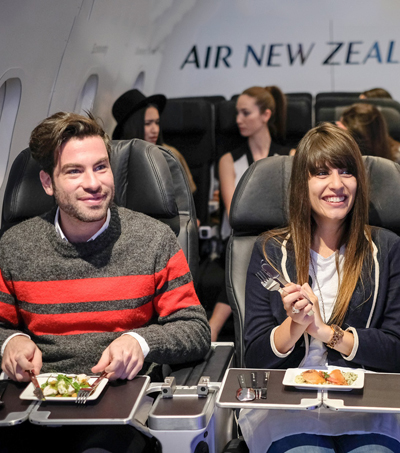 “A pop-up restaurant called This is How We Fly opened for a day on April 24 in London’s Unit London Gallery in an effort to showcase Air New Zealand‘s new in-flight menus,” as reported in an article in Food & Wine.

“This Is How We Fly is an immersive experience spread over two floors,” reads the description of the pop-up on Air New Zealand’s website. “Once checked in and on-board, passengers will be taken on a journey, a chance to experience Air New Zealand without ever leaving the ground.”

A study on 1,000 UK adults accompanied the pop-up, which “revealed that 25 percent considered airplane food to be worse than hospital food while over half of those surveyed dislike plane food in general.”

“When you’re sitting on an airplane you want food with fresh ingredients and great texture that’s going to awaken your taste buds and really excite you,” Gordon told The Sun.