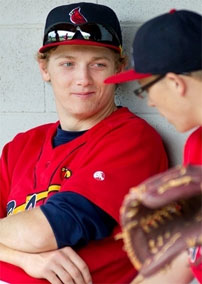 Pitching For the Cardinals

Christchurch baseball player Alex Dawson, has been pitching for the midget AAA St. Albert Cardinals team and has already experienced some of the major differences between baseball in New Zealand and Canada. “In New Zealand it’s a lot more relaxed,” Dawson says. “A lot less people play so it’s not as competitive.” For a nation that started its federal baseball ruling body in 22, the game is relatively fresh. In August, Dawson heads to Doane College in Nebraska to compete in the National Association of Intercollegiate Athletics and play alongside his brother, Nick.