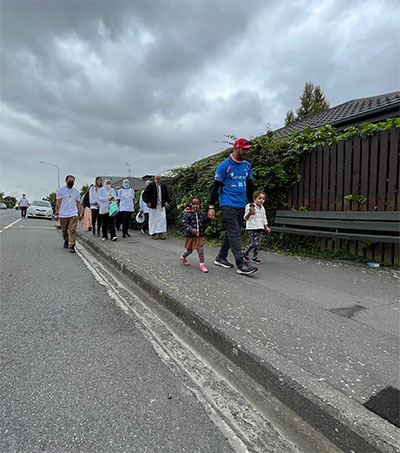 Temel Ataçocuğu Walks for Peace Back to Mosque

It’s been three years since Christchurch faced a horrifying attack – and now survivor Temel Ataçocuğu has finally returned to the scene of the crime, Mehek Mazhar reports in a story for CBC Radio.

Ataçocuğu was at the Al Noor Mosque when he was shot in the mouth, his left arm and both legs. He often still feels pain from the injuries when he walks, but that didn’t stand in the way of his 360-kilometre journey back to the mosque.

Ataçocuğu’s “Walk for Peace” followed in the footsteps of the Christchurch mass shooter. To him it was like a pilgrimage, healing the land and all of its people with each step he took.

“I want to show to all around the world and all extremist ideas how we are strong and [our] faith is very strong. And then I want to show we are one and we are not divided, and I have lots of beautiful people’s support behind me for this walk,” he said.