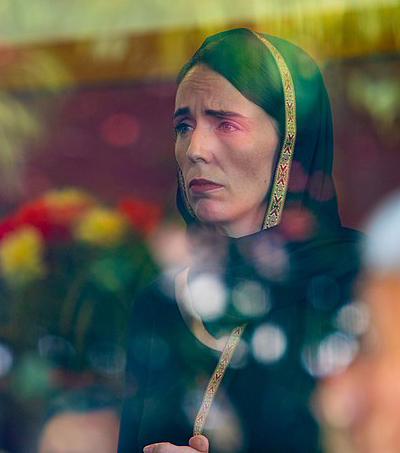 “In October of 2017, when Jacinda Ardern became the Prime Minister of New Zealand—a country with a population of fewer than five million—she assumed leadership of a place not accustomed to making global headlines,” writes Amelia Lester in an article published in The New Yorker.

“When I visited Ardern at her Auckland home, in late 2017, for a profile in Vogue, I was struck by the resolute ordinariness of her existence,” writes Lester. “She and her partner, Clarke Gayford, a celebrity TV fisherman (a species native to New Zealand), lived in the same three-bedroom suburban house they had shared before Ardern became Prime Minister.”

“Back then, neither she nor her constituency could ever have imagined that they would face horror like what happened last week, an event that one local political commentator described to me as “New Zealand’s own 9/11”: fifty people killed at two mosques in the small city of Christchurch, shot dead by a terrorist, as they prayed.”

“Much of the coverage of Ardern’s extraordinary response to the Christchurch killings has praised her compassion, and it’s true that she has displayed an uncommon ability to speak on behalf of a grieving nation,” as reported in the article.

“A few hours after the attack, she addressed the terrorist directly with words that exuded both eloquence and strength. The next day, wearing a black head scarf, she met with Muslim leaders and asked them what they would like her to do… She also hasn’t shied away from naming racism and, in particular, Islamophobia as a root cause.”

“After a few days, though, Ardern made clear that she was interested in more than a gesture of tolerance. On Wednesday, she made an explicit connection between Facebook, where the shooter uploaded footage of his attack in real time, and the rise of extremism,” writes Lester.

“There are some things we need to confront collectively as leaders internationally,” she said. “We cannot, for instance, allow some of the challenges we face with social media to be dealt with on a case-by-case basis.” “The tech platforms, Ardern said, needed to take responsibility for spreading hate.”

“Then, on Thursday, Ardern did something that Americans, in particular, might find unthinkable: with the agreement of the conservative opposition party, she enacted immediate and sweeping changes to the country’s gun laws, banning all assault rifles and military-style semi-automatics.”

“Ardern’s extraordinary display of empathy in the wake of Christchurch has been linked to the fact that she’s a woman,” writes Lester. “It could equally be a result of her upbringing, by a police officer and a school cafeteria worker who instilled in her and her sister a strong sense of service. In either case, she possesses something else, which is an unwavering interest in enacting change.”

From the beginning of her time in office, she has emphasized an outward-looking vision of New Zealand. In our interview, she said that she wanted the country to act as a moral leader in confronting the most vexing global problems of our time.

“One way in which Ardern is inarguably modelling a new type of gendered leadership is in her dual roles as a mother and a world leader,” writes Lester.

“I’ve thought often in recent days about the fact that Ardern has a nine-month-old baby at home. In light of this, her focussed, relentless performance this past week becomes even more awe-inspiring.”