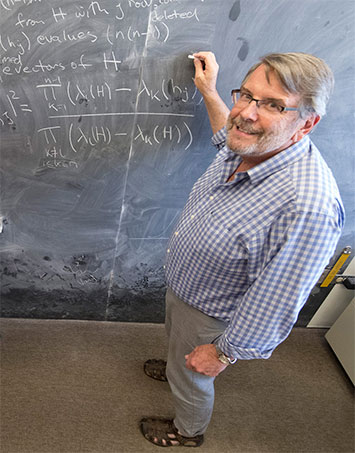 Three physicists, including one New Zealander, wanted to calculate how neutrinos change. They ended up discovering an unexpected relationship between some of the most ubiquitous objects in maths, Natalie Wolchover reports for online publication, Quanta Magazine.

After breakfast one morning in August, Australian-American mathematician Terence Tao opened an email from three physicists he didn’t know. The trio explained they’d stumbled across a simple formula that, if true, established an unexpected relationship between some of the most basic and important objects in linear algebra, Wolchover writes.

The formula “looked too good to be true”, said Tao, who is a professor at the University of California, Los Angeles, a Fields medallist, and one of the world’s leading mathematicians. “Something this short and simple – it should have been in textbooks already,” he said. “So my first thought was, no, this can’t be true.”

Then he thought about it some more.

The physicists – Gisborne-born Parke of Fermi National Accelerator Laboratory, Xining Zhang of the University of Chicago and Peter Denton of Brookhaven National Laboratory – had arrived at the mathematical identity about two months earlier while grappling with the strange behaviour of particles called neutrinos.

They’d noticed that hard-to-compute terms called “eigenvectors”, describing, in this case, the ways that neutrinos propagate through matter, were equal to combinations of terms called “eigenvalues”, which are far easier to compute. Moreover, they realised that the relationship between eigenvectors and eigenvalues – ubiquitous objects in maths, physics and engineering that have been studied since the 18th century – seemed to hold more generally.

Although the physicists could hardly believe they’d discovered a new fact about such bedrock math, they couldn’t find the relationship in any books or papers. So they took a chance and contacted Tao, despite a note on his website warning against such entreaties.

“To our surprise, he replied in under two hours saying he’d never seen this before,” Parke said. Tao’s reply also included three independent proofs of the identity.

A week and a half later, the physicists and Tao, whom Parke called “a fire hose of mathematics”, posted a paper online reporting the new formula. Their paper is now under review by Communications in Mathematical Physics. In a separate paper submitted to the Journal of High Energy Physics, Denton, Parke and Zhang used the formula to streamline the equations governing neutrinos.

As for how they spotted the pattern that suggested the formula, the physicists aren’t sure. Parke said they simply noticed instances of the pattern and generalized. He admits to being good at solving puzzles. In fact, he is credited with co-discovering another important pattern in 1986 that has streamlined particle physics calculations and inspired discoveries ever since – Parke-Taylor amplitudes, which represent a new approach to computing scattering amplitudes in quantum chromodynamics using symmetry methods such as supersymmetry.

Parke, who now lives in Chicago, attended St Peter’s College in Auckland and the University of Auckland. He was a graduate student of Sidney Coleman at Harvard University, obtaining a PhD in theoretical particle physics. He is a Distinguished Scientist and former Head of the Theoretical Physics Department at the Fermi National Accelerator Laboratory in Illinois.