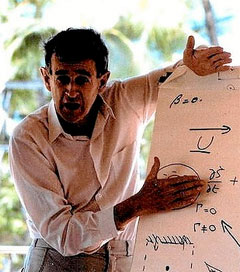 Wellington-born applied mathematician Professor Bruce Morton has died in Melbourne aged 86. Under his leadership, Monash, where he worked for 25 years, became the leading university for its atmospheric science program in Australia. Professor Morton’s reach was far and wide, establishing important links with the Bureau of Meteorology and the Commonwealth Scientific and Industrial Research Organisation (CSIRO). Morton’s research covered several areas in fluid mechanics, such as flow from smokestacks, the flow around fires, and the flow around bridges and aircraft. He had a special understanding of the importance of rotation in flows — called vorticity. Morton’s lectures were famous, described by one colleague as “a trifle chaotic, but always wonderful to listen to and truly stimulating”. Jenni Evans, a student of his in the early 1980s and now a professor of meteorology at Penn State University, wrote: “He was a great friend and mentor to me. He was such a wonderful man and had a positive influence on so many of us. It really is the end of an era.”