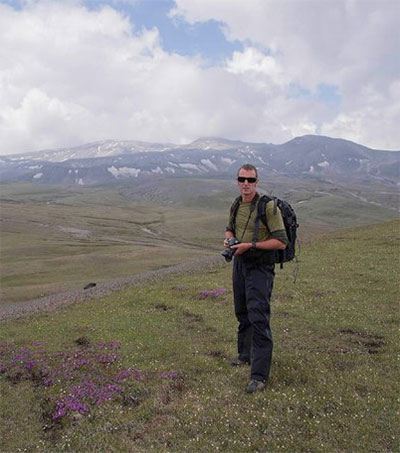 New Zealander Roger Shepherd, who holds the record of being the first foreigner to walk in many of the remotest mountains of North Korea since at least the 1950-53 Korean War, dreams of the day when the people of South and North Korea can travel freely along the peninsula’s single mountain range, which he has climbed in both countries.

Shepherd, who lives in South Korea, said a mere glance at the mountains is enough to convince anyone that Korea is one.

Shepherd took up residence at the foot of a mountain in South Korea in 2010 and founded Hike Korea, a mountaineering guide company. He travelled to North Korea via China on eight occasions from 2011 to walk along the Baekdu Daegan.

Shepherd said a non-Korean like him has the opportunity to climb mountains in both Koreas, but that the demarcation line prevents South and North Koreans from free mountaineering.

He held photo exhibitions in Seoul and Pyongyang, the capitals of the two Koreas, in 2015 and will exhibit in Kyoto, Japan from 20 September through 30 September under the banner, “Just Korea”.

The exhibition in Kyoto is being organised by Chong Ujong, a 33-year-old lecturer of modern and contemporary Korean history with Otani University, who felt an affinity with Shepherd’s activities.

“I want visitors to feel what ‘Korea’ in its own right, which is neither about the North nor about the South, looks like,” Chong said.