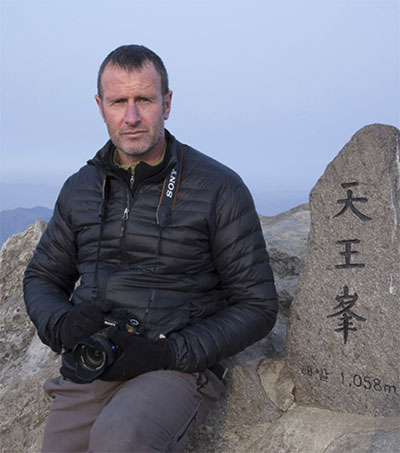 After spending eight years as a safari guide and wildlife ranger in Africa, New Zealander Roger Shepherd, 50, left for the mountains of Korea where he began a hiking business.

Baekdudaegan is the mountain ridge along the length of the Korean Peninsula. Shepherd discovered it a decade ago when he came here for a holiday, the Korea Times reports.

Shepherd returned in 2007 to trek the chain of mountains and decided to write a guidebook. In 2009, he hiked Korea’s mountains for six months.

“I always enjoyed outdoor life, but the Korean mountains got me interested in the idea of walking the ridges non-stop,” Shepherd said. “‘Baekdudaegan’ was the pinnacle of it.

“Inspired by my 2009 walk, I decided to start a business offering tourists guided hikes and to settle down here.”

His company, Hike Korea, not only provides guided hikes but also offers tours to Korea’s cultural and historical attractions in lesser-known areas outside urban districts.

Granted access to hiking the northern section of the ridge in North Korea, Shepherd was able to hike the entirety of what is considered Korea’s backbone.

“I like that Korea is a tapestry of ridges that are all interconnected to each other, and can be walked relatively freely without much restriction,” he said. “The scenery and culture connected to the Korean mountains is also fascinating.”

Shepherd has produced several books based on his hiking experiences. Baekdu-daegan Trail is the first English guide of Korea’s mountains.

Shepherd was a diplomatic protection officer with the New Zealand police. He was also a guard for the Prime Minister and heads of foreign states visiting the country. He guarded former President Lee Myung-bak when he visited New Zealand in 2009.