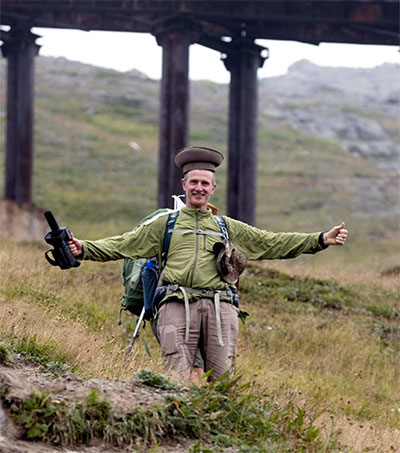 Hoping to open up a side of North Korea rarely seen by outsiders, New Zealander Roger Shepherd who has extensive experience climbing the mountains of North and South Korea, is leading the first group of foreign tourists allowed to trek off road and camp out under the stars on Mount Paektu, a huge volcano that straddles the border that separates China and North Korea.

In 946 A.D., Paektu was the site of one of the largest eruptions in history. It is considered one of the most beautiful natural sites in North Korea and is still active, though there haven’t been any big eruptions in recent years.

Shepherd, founder of Hike Korea, which is based in the South, managed to convince North Korean government officials to let him take his guests off the beaten path for the first time.

The area around the mountain features several reconstructed “secret campsites” said to have been used by national founder Kim Il Sung and his guerrillas in the fight against the Japanese colonial rulers before 1945 – a possible reason why the idea of allowing a foreign camping excursion clicked with the local authorities. But Shepherd’s group has for the most part managed to avoid the typical mini-bus and propaganda lecture experience that often awaits foreign tourists here.

In August, the group climbed the mountain from near its base, walked to the lake from the rim and then hiked out across a volcanic plateau to pitch tents for the first of five nights they were to spend on the hike.

Shepherd said his intention is to get beyond politics during the hike.

He said that after the first day, the trekkers had already begun to forge bonds with their North Korean guides.

“I hope that it’s because mountains and nature does that,” he said. “Out here it’s very apolitical. There’s no need for the nonsense out here. We’re all trying to do the same thing. Work together as a team, pitch tents, eat together and walk together. In my experience, that’s a good way for these guys to see the real people of this country.”