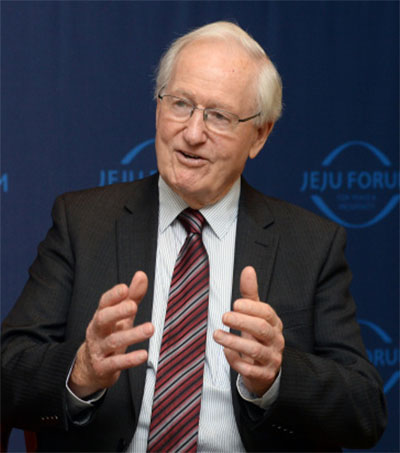 While ramping up global pressure is key to hampering Pyongyang’s nuclear development, Seoul should chart a path to restart denuclearisation talks to defuse tension and move toward an ultimate reunification, former New Zealand prime minister Jim Bolger, 80, said in an interview at the Jeju Forum for Peace and Prosperity on Jejudo Island, South Korea.

Bolger served as New Zealand’s 35th prime minister from 1990 to 1997. He delivered a keynote speech and took part in a discussion with other former premiers on the forum’s theme of “Asia’s new order and cooperative leadership”.

He joined UN Secretary-General Ban Ki-moon in expressing regret over the prolonged freezing of talks with Pyongyang.

“There is no magical point where everything just happens. Every resolution to an issue like North Korea is proceeded by dialogue, discussion. That has to start sometime,” Bolger said.

“Find the circumstances where you can start with small things. That would probably be the family issues between the two Koreas,” he added, pointing to unification as the final destination.

As a non-permanent member of the UN Security Council, New Zealand is dedicated to shoring up international efforts to induce North Korea to abandon its nuclear program, he noted.

“We strongly support the additional sanctions that were imposed after the fourth nuclear test, and we will continue to work with other members in the international community in that space,” he said.

On the economic front, Bolger also expressed high optimism for the future expansion of trade and other business ties between South Korea and New Zealand, lauding the free trade pact that took effect last December.

South Korea could greatly benefit from New Zealand’s expertise in agriculture while New Zealand could learn from Korea’s advanced information technology and computing sectors through the agreement, among other positive outcomes, he said.