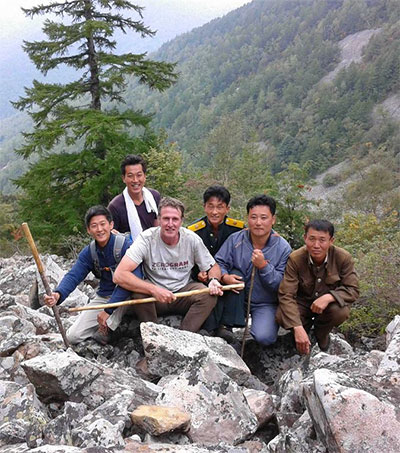 Roger Shepherd, 52, a former police officer from New Zealand who has lived in the rustic southern county Gurye near Mount Jiri since 2011, said Korean mountains have plenty of hidden delights.

Shepherd, 52, is the first foreigner and maybe the first person on Earth who has explored all the mountains of the mountain range in both Koreas.

He said Korean mountain trails are tough to walk but lots of nice surprises await hikers to convince them the adventure is worthwhile.

He said Korean hospitality is one of the hidden attractions foreign hikers would discover, noting elderly locals are warmhearted and open-minded.

“Baekdu Daegan passes through some villages. When you hike the mountain range, you have to get more food, so you [have] to leave the mountain and go down to a village for food,” Shepherd said.

“What happens when those foreigners reach the nearby small village is that the local people there really embrace them and the foreigners are always flattered by the generosity and kindness of the old people there.”

The New Zealander said he learned Koreans’ perceptions of mountains are different from those of Westerners. While Westerners view mountains as a place to walk for fun, Koreans, especially older ones, consider them something “sacred” that breathes life into humanity.

Shepherd operates the Hike Korea website, which helps visitors tour South Korean mountains. His book, Baekdu Daegan English Guidebook, was published in 2010 and revised in 2017. It was the first English guidebook for the mountain range.