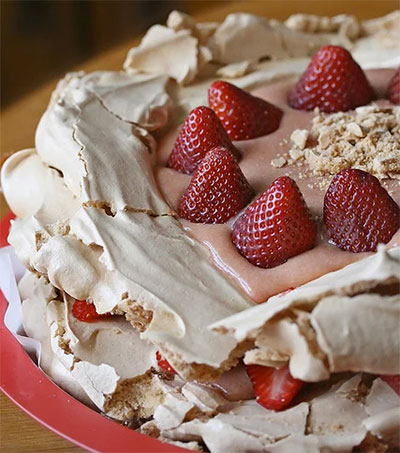 Some of the sweet things you’ve been eating all your life have a very interesting, contentious history, women’s interest site Bustle reports, listing New Zealand’s very own pavlova in its “Strange History of Five Popular Desserts” lifestyle feature.

“Maybe you’ve never heard of this one, but it you have New Zealand or Australian friends, you’ll know this legendary dessert by heart,” Bustle writes.

“It’s a meringue ‘crown’ the size of a platter, filled with cream and any fruits you like, and can be made more complex with several crowns at once. However, it’s also the centre of a decades-long intercontinental fight over its origins.

“One thing is clear: it was definitely named for Anna Pavlova, the most famous ballerina of the early twentieth century. It was created to honour her performances – but who came up with it? New Zealand and Australia have both fought over the honour, because Pavlova visited both countries in the 1920s. It’s become so vicious that the Oxford English Dictionary actually had to weigh in with historical evidence. The winner? New Zealand, where the recipe appeared in 1928; Australia didn’t catch up until 1935. You’ll still find us arguing at dinner parties about this.”