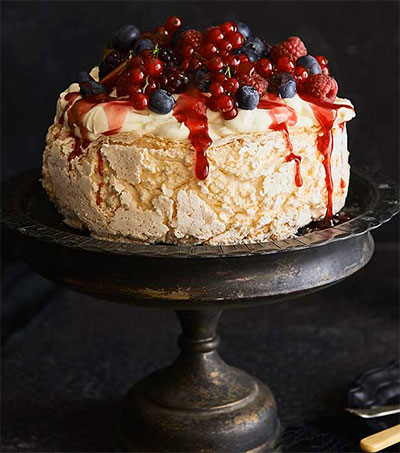 When Does a Meringue Become a Pavlova?

“What exactly is a pavlova?” Irish Times journalist Aoife McElwain asks. And when is a pavlova an Eton Mess, or a meringue, merely a meringue?

“‘I’m serving pavlova for dessert,’ announced the host of a recent supper gathering I attended,” McElwain writes. “This dessert, like all good dinner party courses, sparked a debate: how does [a meringue] become promoted to pavlova? With no disrespect to my gracious and charming host, her version of meringue was closer to another marvellous meringue dessert, the Eton Mess.

“The crucial difference is in the construction of the meringue for the cake base. Regular meringues, the sort you might crush up for an Eton Mess for example, are a simple combination of egg whites and sugar. The pavlova meringue base, however, builds on this simple recipe by adding vinegar and cornflour to the mix. This is what enables a baker to achieve that particular pavlova perfection; a light and airy interior with a crunchy meringue crust.

“The origins of this dessert are linked with the famous Russian prima ballerina, Anna Pavlova. In 1926, the famous dancer toured both New Zealand and Australia. She returned to Australia in 1929 before she died in 1931. It’s widely believed that the dessert was created at some point after these tours in her honour but, to this day, there is contention over the origins of the dessert and whether the Australians or the New Zealanders can really claim ownership of it.

“New Zealand food writer Helen Leach traces the evolution of three pavlova types and notes the difficulties in pinpointing the original. In an interview with Radio New Zealand, Leach talks about the parallel evolutions of meringue cakes in Australia and New Zealand.

“‘They are simply meringue cakes, and the meringue cakes were around [before they were known as pavlovas] … it’s just that I don’t think “meringue cake” is a very attractive name and everyone was so excited about Pavlova’s visit that I can see why they want to rename other dishes “pavlovas”.’

“Dr Andrew Paul Wood, a New Zealander, and Annabelle Utrecht, an Australian, took a deeper dive into the origins of the pavlova cake and published their research in 2015. They found that today’s pavlova has its roots in a German torte which became popular in the United States, finding recipes for around 150 pavlova-like meringue cakes served with fruit and cream before 1926, the date Pavlova visited the Antipodes. Like most great recipes, the pavlova cake appears to be the product of culinary evolution, and an exception to the rule that too many cooks can spoil the broth – or in this case, the cake.”