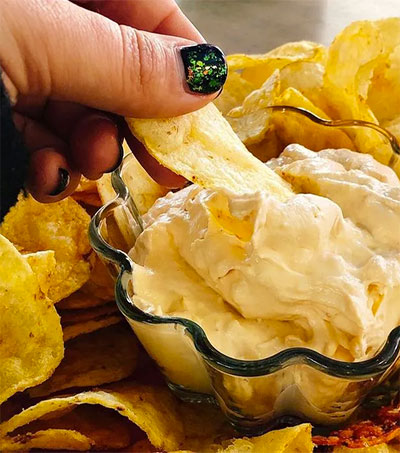 New Zealand is home to many wonderful things, from wacky flightless birds to the real-world incarnation of Tolkien’s Middle Earth. But no matter how great of a country it truly is, New Zealand has struggled to shake off the national identity as Australia’s younger sibling, especially when it comes to food, according to Ali Wunderman writing for USA Today. But there is one dish that is wholly New Zealand, a dish that Australia cannot make any claims to: the glorious onion dip.

It came to my attention during a recent adventure to New Zealand by way of my friend and fellow writer, New Zealander Simon Thomson, who insisted I must sample as much local fare as possible. He (presumably half-jokingly) described onion dip as, “a fundamental part of our culture: the mortar that bonds us together as a people”. Wow. Who could resist a description like that?

Naturally I assumed there was something unique about Kiwi dip that made it such a popular dish – was it made with kiwi fruit, or perhaps even kiwi bird? – but I was delightfully disappointed. Disappointed because it’s just onion dip, but delighted because emphatic devotion to a relatively innocuous dish is very much in line with the wry sense of humour I was discovering New Zealanders have.

When I say onion dip, it should be clarified that New Zealanders are extremely particular about which ingredients can be used: “It’s a mix of Maggi Onion Soup powder, reduced cream, and malt vinegar or lemon juice,” Thomson explained to me. So, it’s not as if any ol’ onion dip, or even onion soup powder, suffices. No, the onion component must be Maggi-branded, the reduced cream should be from Nestle, and you must take a side on the vinegar versus lemon division.

“It has to be the specific ingredients or it’s not Kiwi dip,” echoes Brendan, chef at Heyday Beer Co., a brewery in Wellington’s hip Te Aro neighbourhood.

It takes one dip to realise that New Zealand is nowhere close to being in Australia’s shadow; it is a land unto itself. New Zealanders have managed to turn three simple ingredients (that take mere minutes to prepare) into a nationally unifying party treat, to the delight of locals and visitors alike. Just don’t tell Australia.