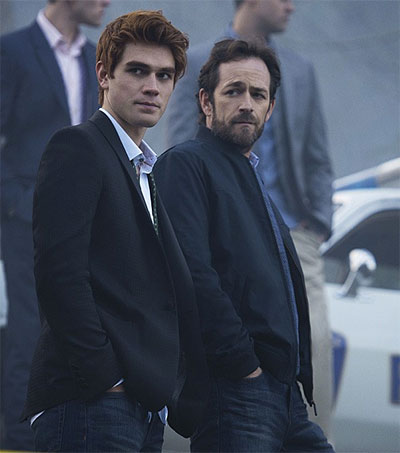 Archie’s certainly not a kid anymore. Or at least not the same kid we knew from the old Archie comics, according to USA Today. He’s a hot, ripped 16-year-old, and a New Zealander – and he’s caught in the middle of a Twin Peaks-ish murder.

Produced by Greg Berlanti, the man behind CW network’s string of DC superhero hits, Riverdale is in line with a recent darkening of the character in the comics themselves.

Riverdale stars Auckland-born actor KJ Apa, 19, as the (dyed) redheaded football hero, yearning for a music career while working for his single-parent father, played by Luke Perry of Beverly Hills, 90210.

As a New Zealander, Apa says his high-school experience did not mirror Archie’s; “My school was more like Hogwarts.” But he can relate to the basic story of a boy who is trying to find his passion and figure out what he’s meant to do.

In an interview with Media Village, Apa explains the physical transformation he had to make for the role, including dying his hair red.

“I’ve exercised my whole life,” Apa says. “My dad got me into it when I was young, so I’ve been training for a long time. It was something I didn’t have to think about going in [to the show].

“The advantage [of being a redhead] is I can go back to my normal hair colour and no one will recognise me and I can go out for other roles.”

Media Village asks Apa, a rugby player, what it was like playing gridiron as an all-American jock.

“I always wanted to wear that uniform as a kid and I finally get to do it. There are no gridiron teams in New Zealand so there’s no way I could’ve ever worn it. I understand the rules of the game now and that took me a really long time. I didn’t like it at first – there was too much stopping, whereas rugby is really fast.”

Apa starred in Shortland Street as Kane Jenkins. He was cast as Archie after a four-month worldwide talent search.