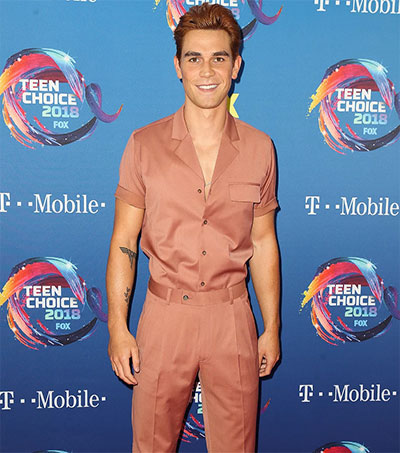 Riverdale’s KJ Apa in Spiffy Choice at US Awards

There was a lot of standout, expressive style on the hot pink carpet at the recent Teen Choice Awards (TCA) in Los Angeles, but one of the most trend-setting fashion moments came from someone unexpected: Riverdale heartthrob New Zealander KJ Apa.

The 21-year-old actor opted for “something comfy” when picking out his look for the event and landed on a salmon-coloured, short-sleeve Dzojchen shirt and pants set that looked just as chic as it did cosy.

“I just liked the colour, that’s what drew me to it,” Apa told People on the TCA red carpet. “I knew that it was going to be really hot, so I wanted to wear something nice and comfy. I think it’s very unique, I feel good, and I wanted to look spiffy for this, but I knew that I was going to sweat in a suit.”

To complete the look, Apa teamed the separates with box-fresh white sneakers (a move straight out of Queer Eye star Tan France’s style playbook) and his signature coif, which seemed match the pink hue of his outfit, a move Apa said was not on purpose.

“It just naturally matched itself together,” he said of his mane, which he dyes red for his role as Archie Andrews on the hit series.

Auckland-born Apa also opened up about his obsession with tattoos, explaining the meaning behind some of his favourites, including the bumblebee on his arm.

“My grandmother and my mum both have the same bee, and I got the wreath around it when I was actually waiting for another tattoo that is on my left shoulder,” he said of the arm tat, adding, “I’m addicted to them – I love tattoos, I love the art of them, and I love the experience of getting them.”