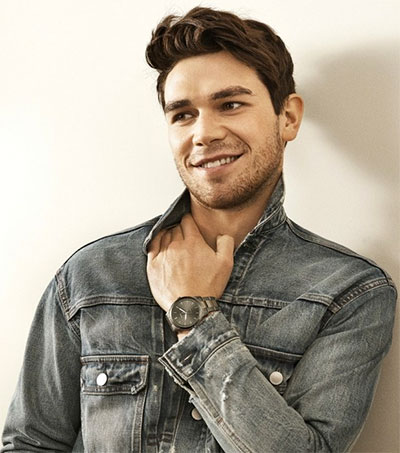 New Zealander KJ Apa, 21, returns to his role as heartthrob Archie Andrews in the American series Riverdale in October, but the Auckland-born actor has been having quite the busy summer in the lead-up to the new season, not to mention keeping his almost 10 million followers up to date on Instagram.

He’s played Coachella and other tour dates with Kygo, completed shooting for The Hate U Give, and another one of his movies, The Last Summer is in post-production. But Apa’s latest endeavour has him dipping his toes into the fashion world – a realm he admitted to Teen Vogue he doesn’t put too much effort into – as the new face of Fossil.

Perhaps his nonchalant approach to style is why his campaign photos (and everything he does really) come off so effortless.

“When they approached me, I was really excited about it because their thoughts for the campaign were really honest and cool ideas. It worked out perfectly,” Apa said.

“I try to keep my Instagram authentic,” he explained, “which was another reason I was so keen to work with Fossil because their campaigns this year are so honest and are about people being true to themselves, which I can relate to and it’s what I’m attracted to these days. It’s hard to find brands like that and to see that kind of stuff in today’s world because there’s so much fake stuff out there.”