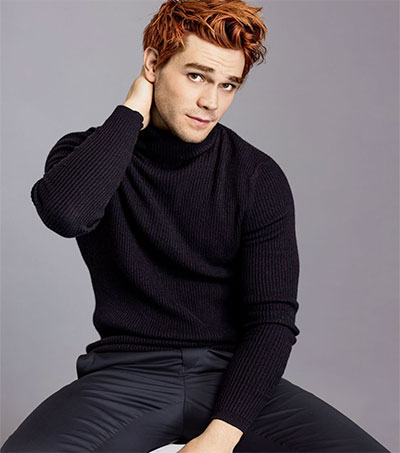 KJ Apa, the New Zealand import turned Riverdale star, captured hearts (and Instagram followers) when the show premiered in 2017. Riverdale was just renewed for its third season, so it looks like Apa, 20, who is originally from Auckland, isn’t going anywhere anytime soon. He answered Cosmopolitan’s most burning questions.

What’s it like shooting sex scenes, the magazine asks.

“It’s weird with someone you don’t know that well. On a movie set, you have time to get to know the person and rehearse before shooting. Camila [Mendes, who plays Veronica] and I just had to dive into it. Now that we’re friends, it’s easier,” Apa confesses.

“Guys in the States are a lot more confident than guys in New Zealand. There, if you go out with your mates, you all hang with one another because you’re too scared to talk to the girls. Being in the US has made me way more confident. Also, having a New Zealand accent increases your chances by like 50 per cent.”

Why is it okay to be nervous?

“I’m a thrill seeker,” he says. “I’m keen on adventurous stuff, like bungee jumping. I still get nervous – you can’t help it when you’re falling a hundred metres – and I feel nerves every day on set. But I think if you don’t feel nervous about something, it’s not important to you.”

Apa stars in the upcoming American film The Hate U Give.

Tags: Auckland  Cosmopolitan  KJ Apa  Riverdale  The Hate U Give