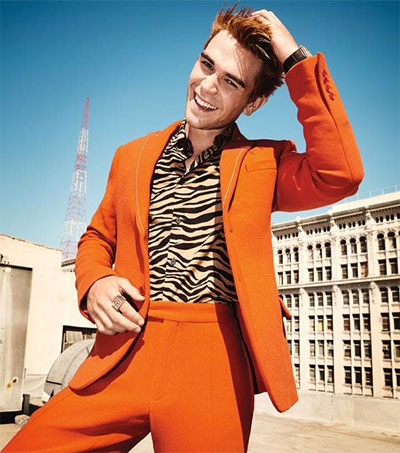 KJ Apa is really going places. Driven, humble, talented, the boy from New Zealand is soon to be everywhere, according to Jake Millar in a cover story written for GQ Australia.

Apa, 21, doesn’t so much arrive at today’s shoot as appear, suddenly, out of the darkness. He’s just there and then he’s everywhere, Millar writes.

It’s hot. 10am and already 32 degrees outside, and we’re downtown in the Los Angeles Theatre.

Apa takes refuge in the one dressing room with a fan and lies on the ground, shirtless, with his arms and legs spread out either side like a star. His hair is the colour of fire. It’s a dye job courtesy of his role in TV series Riverdale that requires a regime of bleaching and touch-ups every two weeks.

The show is a teen-friendly high-school drama based on the characters in the Archie Comics series, with Apa playing the lead redhead.

Obama was still President of the United States when Apa was cast in Riverdale. It’s just been picked up for a third season, which will air on Netflix in October, and its stars are signed on for a total of six years. If the show keeps getting the green light, Apa will be in the role until he’s 24 – a quarter of his life spent as Archie Andrews.

Thanks to his role as Riverdale’s resident thirst trap, Apa is ripped and even though we’ve been told not to shoot him shirtless – everyone does that – we’re not even halfway through the first look, when the shirt comes off.

The heat, you know.

It’s also a chance to see his latest tattoos. Born in Auckland, Keneti James Apa is half Samoan and his first was a tribal design on his right shoulder. Over the past year, he’s added three more to the growing collection – a bee in tribute to his grandmother (“she loves bees”) and a Van Halen logo (his favourite band) on his right forearm.

We have two more looks to shoot and Apa is beginning to get anxious. He has a car picking him up to take him to the airport, but he has a better idea. He wants to go early, to try to make a different flight.

“I’m just focusing on the show and as we get to the end of the season, thinking about what I’m going to do on this hiatus. Hopefully I’ll be working the whole time,” he says of his plans for the future, as we wrap up. “That’s the goal.”