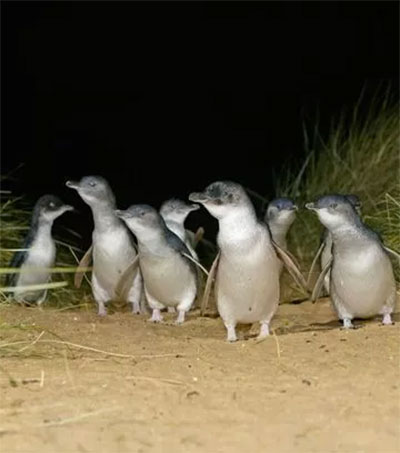 Life can be tough when you’re a blue penguin. For starters, you are no taller than a house cat and weigh less than a kilogram. That means many other creatures – rats, ferrets and wild dogs, to name a few – view you as a tasty snack, Sarah Sekula reports for USA Today. The journalist and video host travelled recently to Oamaru to meet the world’s smallest penguins that happen to have their own VIP tunnel.

Philippa Agnew sees it firsthand. As a research scientist at the Oamaru Blue Penguin Colony in the South Island, it is her job to study these lovable birds. She has dedicated her life to making sure they thrive in their natural habitat of New Zealand and Australia.

A few years ago she noticed a certain penguin colony returned home each night only to meander across a busy intersection and hold up traffic. Her aha moment: Why not build the birds a tunnel that would shuttle them from the coast all the way back to the nesting site? It wasn’t long before she was rallying people together to build a 24-metre tunnel underneath Waterfront Road.

“We fenced an area at the top of the tunnel so the penguins didn’t use their usual route,” Agnew says. “Then, we used a combination of lighting, some penguin calls and a little bit of ushering and eventually the penguins saw that they could go through the tunnel and started using it.”

Just down the road at the Oamaru Blue Penguin Colony, where I’ve come to meet them myself, there are even more penguins. A colony of about 350 Little Blues, as they are affectionately called, nest here in what can only be described as a penguin neighbourhood.

The first thing I notice is that the penguins’ plumage really is a lovely shade of indigo unlike any other penguin in the world. The second is that for such pipsqueaks they can squawk up a storm.

“The penguins are wild, coming and going naturally, they leave the colony before it gets light in the morning and return from sea at night as it starts getting dark in the evening,” Agnew says. “We protect them from introduced predatory mammals and human disturbance, we also provide them with space to nest and nesting boxes to breed in.”