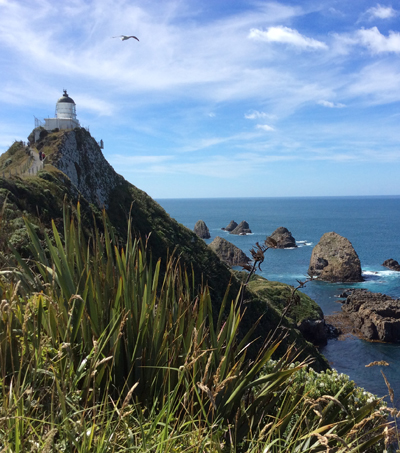 “New Zealand is perfect for long, meandering road trips, especially in its scenic South Island. If driving on windswept coastal roads is your idea of a good time, then there’s no better region to explore than the South Island’s wave-cut Otago coast that is rich in wildlife and geologically fascinating landscapes,” writes Kenny Mah in an article for Malay Mail Online.

Where to stop on your Otago coastal drive:

1. Christchurch is a great starting point for a drive down the Otago coast.

2. The small coastal town Oamaru is a nice place to stop and stretch your legs – it also is the birthplace of former All Blacks captain Richie McCaw.

3. From Oamaru it’s only a half hour drive to the famous Moeraki Boulders.

4. Shag Point (another 10 minutes driving south) is one of the best places to see fur seals. “Its vibrant flora and fauna — from unusual species such as the snow tussock and the alpine daisy to occasional spotting of whales and dolphins – make it a haven for wildlife viewing,” writes Mah.

5. About an hour further south you will reach Dunedin. According to the article, “the drive into the Scottish-influenced town, the heart of the Otago region, is an adventure in itself”.

6. Otago Peninsula and its “dramatic landscapes will take your breath away,” writes Mah. “Marine wildlife can be found in abundance here: fur seals and sea elephants, Steward Island shags, penguins and the graceful Royal Albatrosses.” Mah also recommends stopping at Larnach Castle, the only castle in Australasia.

7. Nugget Point is practically the southernmost tip of the east coast of New Zealand’s South Island and “feels like the end of the known world”.