NZEDGE  >  News  >  Innovation  >  Business  >  On a Mission to Advantage the Disadvantaged 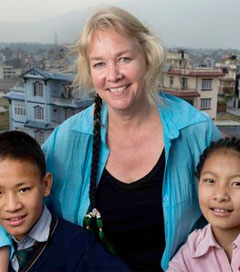 On a Mission to Advantage the Disadvantaged

New Zealand-born Audette Exel, 50, lives a double life, Bloomberg Market Magazine reports. In New York, London, Bermuda and Sydney, she’s a company director and the owner and head of Isis (Asia Pacific) Pty, which advises companies on mergers and raises money for fund managers such as New York-based Aquiline Capital Partners LLC. In the dirt-poor Himalayan foothills and civil war-ravaged East African bush, Exel is better known as the caftan-wearing founder and chief fundraiser of the Isis Foundation, which she says provides life-saving health care and education for 20,000 people a year in two of the world’s most impoverished nations, Nepal and Uganda.

Isis AP pursues deals as relentlessly as its competitors, with one difference: Exel turns over all of the Sydney-based company’s profit to her foundation, which spends it on projects ranging from a neonatal intensive care ward in Kiwoko, Uganda, to a refuge for 136 Nepalese children who had faced being sold for prostitution and child labour. While Bill Gates and George Soros only began to concentrate on giving after they became billionaires, Exel says she didn’t want to wait until she had amassed a fortune to begin her philanthropy.

“It’s the purpose of the business,” she says. “There’s one mission.” In addition to running closely held Isis AP, which in the past decade has raised $720 million for private-equity firms and other asset managers, she’s vice chairman of Steamship Mutual Underwriting Association Trustees (Bermuda) Ltd., a unit of one of the world’s biggest mutual shipping insurers. She’s also a director of Suncorp Group Ltd. (SUN), a Brisbane, Australia-based bank and insurer that’s one of that country’s 20 biggest listed companies.

“My life has been so enriched by this work,” Exel says. “I spent a lot of my life advantaging the advantaged. It is so much more fun to advantage the disadvantaged.”