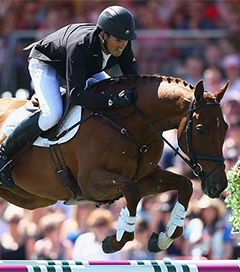 New Zealander Jonathan “Jock” Paget, 29, became only the second person to win the Badminton horse trials at the first attempt, says The Telegraph. Paget, a former bricklayer who only started riding at 18, beat out Michael Jung, the German World and Olympic Champion, in a dramatic showjumping contest. Paget rode a clear round on his horse, Clifton Promise. Jung however, was leading into his very last jump, but then knocked over a rail to give Paget victory. In another twist, Jung had been training Paget over the spring. Paget did not watch Jung’s ride. He told the Telegraph his win came as something of a surprise. ‘I have lost out at other four-stars with tiny mistakes and came here secretly knowing I could win. I was out in the collecting ring with my horse, not watching Michael [Jung]– like everyone else I assumed he would do it. Then I heard the roar turn to a gasp and thought: ‘S—, it’s me!’ I will probably celebrate with a beer, but can’t overdo it – I have another competition in two days’ time.’ New Zealander Andrew Nicholson finished third after a clear round on Avebury, just missing out on the $400,000 bonus for winning the Grand Slam of Eventing. Sir Mark Todd won the event when it was last held in 2011. Todd was the first person to win at Badminton on debut, when he rode Southern Comfort to victory in 1980.