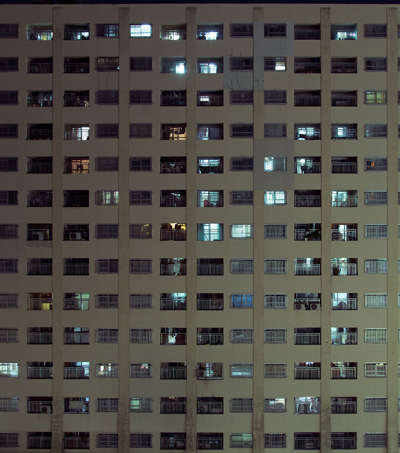 “Japan is famed for its ultramodern cityscapes. But what happens when the ultramodern becomes old?” Photographer Cody Ellingham is using landscape photography skills developed in New Zealand to explore fading monolithic public housing projects in Japan at night, and the significance of these buildings for the lives of the people within. His exhibition DANCHI Dreams is dedicated to that exploration and will launch in Tokyo at Takiguchi Atelier in Koto-ku on May 12. The series follows on from Ellingham’s DERIVE series of futuristic Tokyo cityscapes, which was released last year.

The large public housing blocks, Ellingham visited at dusk and early evening for his exhibition are known as ‘danchi’ (‘group land’).

He said danchi could be viewed as “mountains of steel and concrete”.

“They are often built in clusters, sometimes of up to 70 buildings; each numbered rather than named, with each apartment the same as its neighbours from the outside. One of the largest complexes at Takashimadaira houses around 20,000 people – a similar population to the town of Levin.”

“Ellingham said while his interest in danchi started as an aesthetic fascination, it progressed toward the history and social significance of the residences, once proud but now solemn and decaying. Part of his goal is to record a history that could be lost.”

“Talking to older people, danchi were a dream for them. Something to aspire to. The old houses were little villages made from earth and wood. Danchi represented a new and modern way of life,” he said.

Originally from Paki Paki in rural Hawke’s Bay, Ellingham said this lifestyle was alien to most New Zealanders.

“He said danchi were now seen as archaic, sterile and decaying – “Kafka-esque” residences where each person has the same life.”

“But despite the anonymous, ‘carbon-copy’ lifestyle of the fading monoliths, he sees beauty rather than despair in the buildings, which for many people are the only home they know.”

“There’s a certain kind of nostalgia in these places. The look of it is cold concrete, but deep down, you find glimmers of hope, playgrounds, mural art, community facilities, and the original dream: that tomorrow will be better than yesterday,” he said.