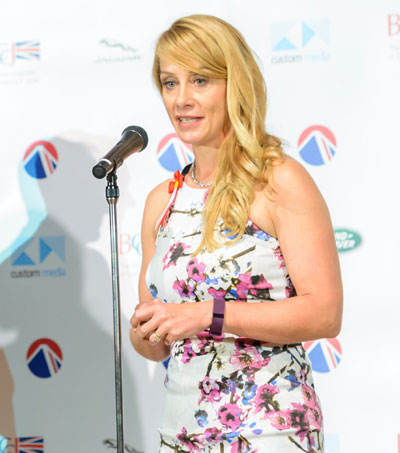 Jacky Scanlan Dyas, a Kiwi from Gisborne and a corporate partner at Hogan Lovells’ Tokyo office, has won the Person of the Year Award at this year’s British Business Awards at a gala event at Tokyo’s Hilton. The awards are “organised by the British Chamber of Commerce in Japan (BCCJ)” and the “winners are chosen by a panel of five independent judges with backgrounds spanning trade, sport, law, government and engineering.”

Scanlan Dyas won the award “for her dedication to preserving the strength of the UK Japanese commercial relationship post Brexit by helping Japanese businesses analyse its impact as well as leading community pro-bono and gender equality projects,” as stated in the winners’ announcement.

“The BCCJ applauds all nominees and congratulates the winners on their remarkable achievements. Competition for all awards was intense, reflecting the high quality of the nominees and vibrancy of the British-Japan business relationship,” said BCCJ President David Bickle.

The British Business Awards, which have become “one of the largest annual events enjoyed by the foreign business community in Japan”, recognise “British innovation, entrepreneurship, business success and social contributions in Japan”.

“After graduating with honours in law and a bachelor of arts in Japanese from Canterbury University in New Zealand, Jacky Scanlan Dyas commenced her career at Russell McVeagh in Auckland. In 1998 she left New Zealand and has spent her time since then in London, New York and Tokyo. Jacky is recognised as an up and coming practitioner by various publications including Chambers Asia Pacific.

Company of the Year: GlaxoSmithKline K.K.

Entrepreneur of the Year: Tamao Sako (The British Pudding)