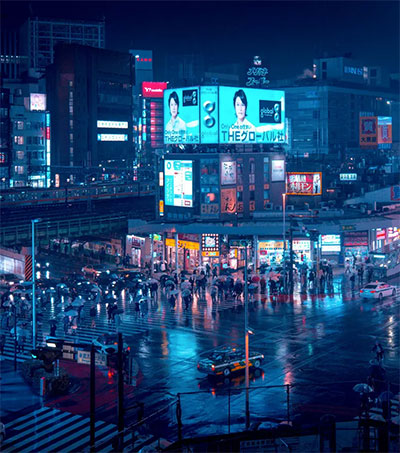 With his moody night-time shots of urban environments, New Zealand-born, Tokyo-based photographer Cody Ellingham tries to tap into the current of a city, to travel forward into its future or retreat into the past.

Ellingham came to photography while travelling through northern Japan shortly after it was devastated by the 2011 earthquake and tsunami. Volunteering in the town of Otsuchi-Cho in Iwate, he was moved to capture on camera the foundations of buildings and towns that had been exposed in the disaster and streets that no longer existed. Shooting with a Sony a7RII camera fitted with specialist architectural lenses, he began sharing his work on Instagram as @cbje_tokyo in earnest in 2016.

Since then, Ellingham has moved to exploring other facets of the urban experience, including Japanese public housing in his series Danchi Dreams and the night-time neon lights of some of the world’s high-tech megacities in Derive. He finds his subject matters by exploring places on foot and without a map, aiming to flow through a city by following streets and paths that catch his attention.

Sometimes, he says, this can take you back in time, to a supposedly haunted skyscraper built on the grounds of Sugamo prison – or the historical heart of Tokyo, Nihombashi. “Even in a megacity like Shanghai or Tokyo, where everything is constantly changing, if you look hard enough you can find the ‘old city’ from 80 years or 100 years before. It has not disappeared – it has simply changed form.”

His favourite city to shoot so far is Shanghai, he says, with the skyscrapers, infrastructure, art and culture combining to create an inspiring vision of the world to come. “I only spent four days there, but in that time I felt like I had seen the future.”