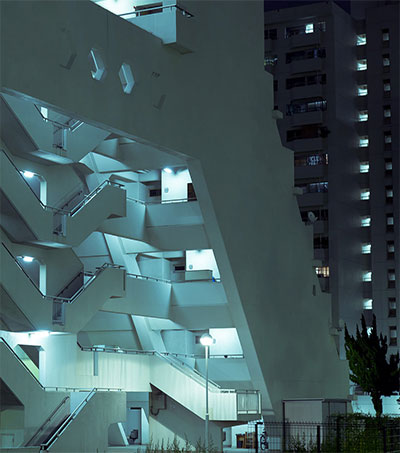 Ellingham’s year-long photographic survey captures the history and social significance of these public housing blocks, which emerged in the 1960s as Japan was faced with rapid modernisation and urbanisation.

Modelled after the apartment blocks built by the Soviet government, danchi – which translates literally to “group land” but has come to refer to Japan’s public housing blocks – were made from western materials and western designs; in their time, they were considered the height of modernity. Today, fewer and fewer Japanese live in the gradually aging housing, preferring other models such as single-family homes or condos. Though many of the buildings sit dilapidated and depopulated, they remain tranquil architectural giants of the cityscape.

“There’s a certain kind of nostalgia in these places,” Ellingham says. “The look of it is cold concrete, but deep down, you find glimmers of hope, playgrounds, mural art, community facilities, and the original dream: that tomorrow will be better than yesterday.”