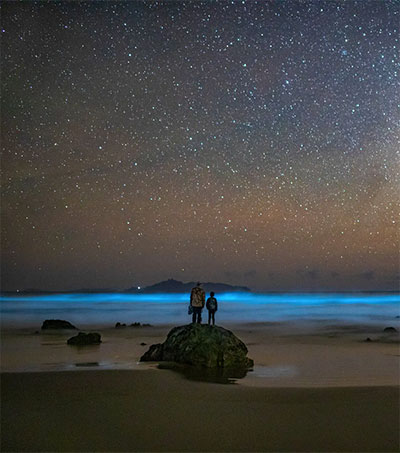 Capturing bioluminescence, a phenomenon in which glowing algae give crashing waves an electric blue glow, requires technical skill and a bit of luck, Mike Ives reports in an article for The New York Times. New Zealand is an especially good place to “chase bio”, as enthusiasts here say.

Photographers who hunt bioluminescence in New Zealand, many of whom have day jobs, say that summer is generally the best time to spot it, Ives writes.

Aucklander Matthew Davison, 37, a product developer for a technology company, has a method for finding bioluminescence. First he studies satellite imagery to identify algal blooms off the coast. Then he combs through other indicators, such as wind direction and tidal patterns, to predict where waters may glow.

“Unless you’re there, unless you capture it, no one would believe – could not even possibly imagine – what you’re witnessing,” Davison said. “The best way to share what you’ve seen is through the power of an image.”