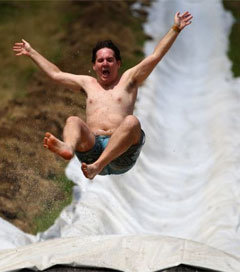 New Zealanders Jimi Hunt and Dan Drupstee have built the world’s longest waterslide, writes The Daily Mail. Their slide, at 650 meters long, beat the previous record by nearly 440 meters! Two thousand people rode the slide during the two days it was open. The slide was built using two shovels and a digger. The slide was erected by the pair as their contribution to an Auckland festival designed to combat depression. In a video, Mr Hunt walks through a ‘luge-track’ style trench cut in the hillside, which includes a ‘tunnel’ where the slide runs under a fence, says The Mail. ‘We’re a couple of Kiwi guys who like so many others have really suffered at hands of depression. It was really tough, but having come out the other side we decided the best way for us to keep depression at bay was to ‘Live More Awesome’…  It’s much easier to make a difference when you have friends by your side. We hope this amazing project will encourage others to do the same and we want people to know it is okay to ask for help,’ Mr Drupstee told the Mail.