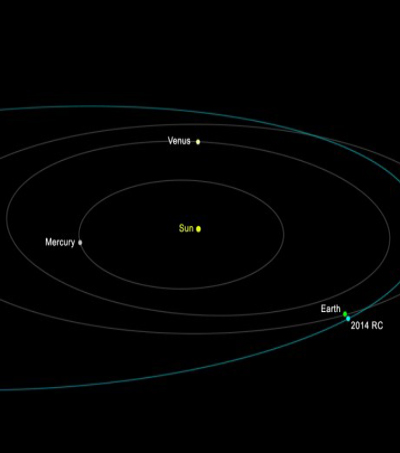 An asteroid is set to pass Earth closest to New Zealand, at a distance of just 25,000 miles, this weekend.

Asteroid 2014 RC was discovered by astronomers on 31 August and will pass New Zealand on 7 September at about 19.18 GMT at its closest approach.

The asteroid will fly a tenth of the distance from the centre of our planet to the Moon. The image, left, shows the path of asteroid 2014 RC set to pass Earth this weekend.

The asteroid was discovered by the Catalina Sky Survey near Tucson, Arizona and was independently detected the following night by the Pan-STARRS 1 telescope in Hawaii.

Follow-up observations confirmed its orbit and showed how close 2014 RC will come to Earth.

“The asteroid’s apparent magnitude at that time will be about 11.5, rendering it unobservable to the unaided eye,” Nasa said in a statement.

“However, amateur astronomers with small telescopes might glimpse the fast-moving appearance of this near-Earth asteroid.”

The asteroid is about 20m across and scientists said that although it does not appear to pose any threat to Earth, it provides a “unique opportunity for researchers to observe and learn more about asteroids”.

Asteroid 2014 RC is expected to return to Earth’s orbit in the future and astronomers will closely monitor it.

At present, no “future threatening Earth encounters have been identified,” the space agency said.