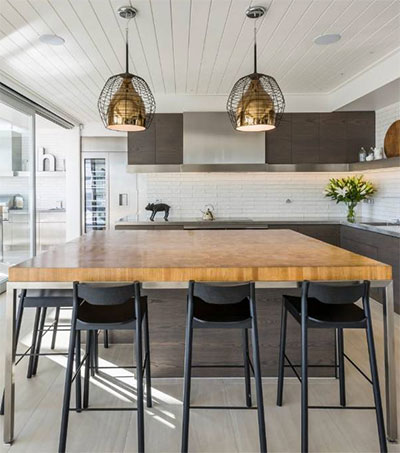 Christchurch designer Davinia Sutton of Detail by Davinia Sutton has just won a massive three German Design Awards for Interior Architecture 2019, for two kitchens and a bathroom. And Wellington designer Damian Hannah of German Kitchens won the same award for a kitchen in a Marlborough Sounds house.

Sutton, who is not new to award winning – she has won numerous other awards – says she was very overwhelmed to hear she had won three German Design Awards.

“It hasn’t quite sunk in yet,” Sutton says. “I have known for a few weeks, but they have only been announced this week and I am still a bit overwhelmed. It is such a honour.”

Judges said Sutton’s contemporary kitchen in a Canterbury house was notable for its “superb details”. “Also visually striking is the enormous wooden board, which is meant to evoke a sturdy chopping block of the type used in butcher shops.”

Hannah’s award-winning kitchen features a 3600mm by 1800mm island that creates a multi-dimensional workspace for more than one chef.

The designer says he drew inspiration from the many islands that surround the Sounds. “The dark graphite island is colour-matched to the rocks seen out the windows. And the tall white gloss glass cabinets reflect the stunning views and rolling hills.”

The German Design Awards for 2019 will be presented at the Ambiente trade show in Frankfurt in February.