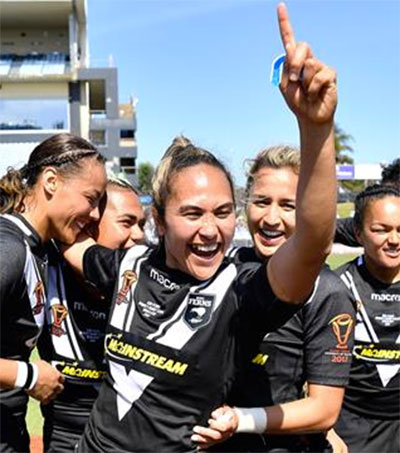 England’s women were beaten 52-4 by New Zealand in the 2017 Rugby League World Cup semi-finals at the Southern Cross Group Stadium in Sydney.

Tara-Jane Stanley ran over England’s only try in the 21st minute as they trailed 14-4 at half-time, but New Zealand produced a strong second half.

A hat-trick from Honey Hireme and a double from Krystal Murray ensured the margin of victory was so emphatic.

The Kiwi Ferns will face Australia in the final after they beat Canada 58-6.

England battled through to half-time and were still within touching distance.

However, they were no match for New Zealand in the second half as the Kiwi Ferns – winners of the tournament in 2000, 2005 and 2008 – scored seven further tries.

“Whenever you go into a World Cup that is everyone’s goal to win it. We don’t care how many we have won in the past or who we are up against – it is what it is and all that matters is that we are on the same page.

“The girls are gelling off the field and we have a great team culture where we respect one another, which is one of our strengths as Kiwi Ferns, as New Zealanders.

“We’ve got a job to do and we have to stay focused.”

The final takes place in Brisbane on 2 December as part of a double-header with the men’s World Cup final.