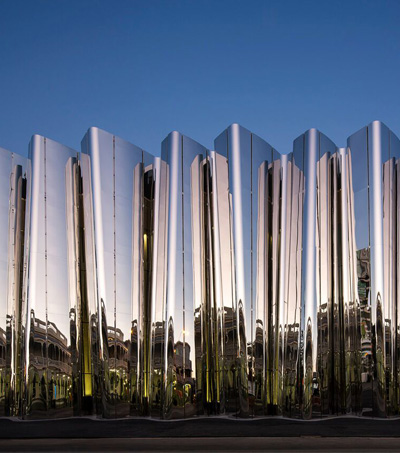 “If Len Lye didn’t exist, you couldn’t have invented him,” writes the New Zealand Herald’s Adam Gifford about the pioneering experimental filmmaker and kinetic sculptor on the eve of the opening of the Len Lye Centre, “a world-class building dedicated to our most innovative, versatile artist.”

The gleaming new landmark—New Zealand’s first single-artist museum—is designed by internationally acclaimed Patterson Architects Associates and opened in late July in New Plymouth, Taranaki. Lye’s oft-quoted line that “great architecture goes 50/50 with great art” served as an inspiration for the building’s undulating design. “By creating a dynamic, shiny façade that brings to mind a moving theater curtain, the architects hint at Lye’s kinetic art,” writes Frederika Fraser in her review of the building in Wallpaper. “The facades’ curves manipulate natural light to create a range of reflections, depending on the day and the season. At the same time, the skin-polished steel ties the building with its locale, as it celebrates the pioneering stainless steel works in the country’s Taranaki region.”

The design of the museum—financed via an extensive government-led fundraising program—articulates Lye’s philosophy on the relationship between art and architecture. The design of the reverential space, which creates a sensory experience from light as a “temple” for art, puts a modern spin on ancient Greek classicism and challenges the dominance of pure modernism in much of contemporary architecture. “Lye was fascinated with temples and the design uses principles from the classical world as well as Polynesian forms and ideas,” says the project’s lead architect Andrew Patterson. “These influenced Lye’s work and after all, he was the client.”

The Taranaki Daily News reports that the project took more than 35 years to realize, and “would never have come to fruition if it weren’t for Lye’s generosity.” In his final months, the artist (1901-1980) legally transferred ownership and copyright of all the works owned by him to the Len Lye Foundation, a charitable trust established shortly before he died. And, since Lye expected many of his works could not be made with the technology available to him during the time he was an active artist, he endowed the Foundation with a license to create unrealized work or reconstruct existing work. The Centre’s curator, Paul Brobbel, says that exhibitions will change about every four months and that, between the 18,000 items in the Lye Collection and Archive and new works being realized by the Trust, fresh work will always be on display.

The museum’s curator makes a powerful case for Lye’s principal importance in the story of modernism, suggesting that through the New Zealander “we can touch almost anything in 20th century art.” The founding of museums such as the Clifford Still Museum in Denver, the Dali Museum in St. Petersburg, Florida, and the Gehry Guggenheim in Bilbao, are once-in a generation events that have had transformative impact on those cities. There is every expectation that the Len Lye Centre—which welcomed over 13,000 visitors during its opening week—will put New Plymouth on the international map as a significant culture and tourism fixture.