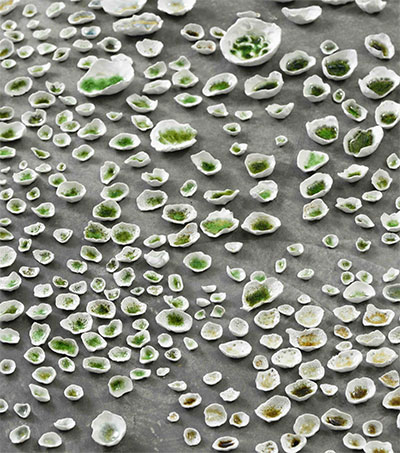 In celebration of Earth Day 2022, Wallpaper discovers the group exhibition ‘Reclaim the Earth’, a wake-up call for humans to reconsider our relationship with the planet. Exhibiting two pieces in the show, held at Palais de Tokyo in Paris, is Auckland-born Kate Newby.

“‘Reclaim the Earth’ is both the title and the rallying cry of a new group exhibition at the Palais de Tokyo,” Amy Serafin writes for the magazine. “It looks beyond the Western model to other ways of existing in the world, where humans are an integral part of the environment rather than a dominating, and often destructive, force.

“‘Reclaim the Earth’ starts outside, in the urban environment, with two works by Newby. Newby, 43, does all of her work in situ, using local materials and techniques, and is a careful observer of her surroundings. [She] created one by asking the Palais de Tokyo team to pick up all the bits of glass they found on the streets of Paris, then melting the pieces into porcelain shells that she scattered on the floor like a bed of colourful oysters.”