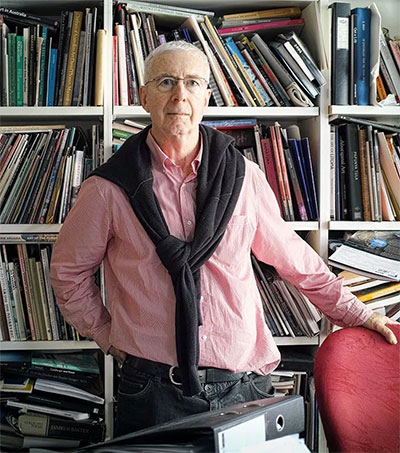 “Ian North – curator, academic, artist, and writer – is rightly honoured as an Australian living treasure in [the] magnificent new book [Ian North: art/work/words] from the Art Gallery of South Australia (AGSA),” Diana Carrol writes for ArtsHub. “And the native New Zealander is indeed an adopted Adelaidean, much loved by the city where he has lived and worked for many years.”

“This beautiful large-format hardback traces [North’s] successful and multi-faceted career with essays by twelve expert authors, including Daniel Thomas, Joanna Mendelssohn, Pedro de Almeida, and Helen Ennis. Afterword: Ian North was here, by North’s childhood friend and fellow arts practitioner Lloyd Jones, is particularly engaging,” Carrol writes. “The book is edited skilfully and sensitively by Maria Zagala, associate Curator of prints and photographs at AGSA, who acknowledges ‘the self-deprecating assistance of North himself’. Four of North’s own earlier essays are also included in the ‘words’ section.

“Taken together, the book gives a substantive overview of North’s wide-ranging career, highlighting his significant body of work in photography from the 1970s to the present day, and his contribution to museum practice through posts as curator of paintings at AGSA (1971-80) and foundation curator of photography at the National Gallery of Australia (1980-84). He began his career in New Zealand as director of the Manawatu Art Gallery, before migrating to Australia to take up the position at AGSA.

“North has also influenced many other arts practitioners through his involvement with the SA School of Art (SASA) and the University of Adelaide. It was his foresight that established the College Gallery at SASA that later became the important Samstag Museum of Art in Adelaide. In 2014 he was awarded a Medal of the Order of Australia (AM) and a Doctor of Arts honoris causa from the University of Adelaide.

“Now in his seventies, North has been making art for over six decades. His arts practice is primarily photographic, although he is also recognised as a painter of some considerable note.

“Writing in the introduction, Maria Zagala says the book ‘is akin to Festschrift – the German word for a collection of essays published in honour of an individual who has made an important mark on their field’. And so it is, and a worthy honour too. The essays are intelligent and considered and the reproduction of the artworks is of exemplary quality.”