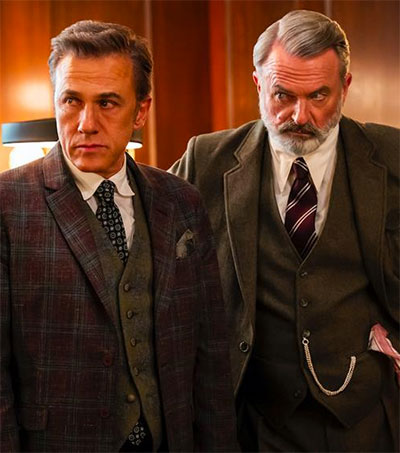 First Look at Sam Neill in The Portable Door

Good news for fans of magic, adventure, and comedy: ArtsHub now has its first look at The Portable Door, Stan and Jim Henson Company’s comedic fantasy-adventure, which stars New Zealander Sam Neill and Austrian-German Christoph Walz, and which is currently filming in Queensland. Jini Maxwell reports.

The Portable Door tells the story of Paul Carpenter (Gibson) and Sophie Pettingel (Wilde) who are the lowly, put-upon interns who begin working at a mysterious London firm J.W. Wells & Co. Soon, they become aware that their charismatic employers are anything but conventional: villainous Humphrey Wells (Waltz) and Dennis Tanner (Neill) are disrupting the world of magic by bringing modern corporate strategy to ancient magical practices.

Producer Todd Fellman described the film as “lots of fun for audiences of all ages”, praising the cast’s comedic performances in particular: “It has been exciting to watch the diverse comedic talents of our incredible cast take this gem of a script to a whole new level.”