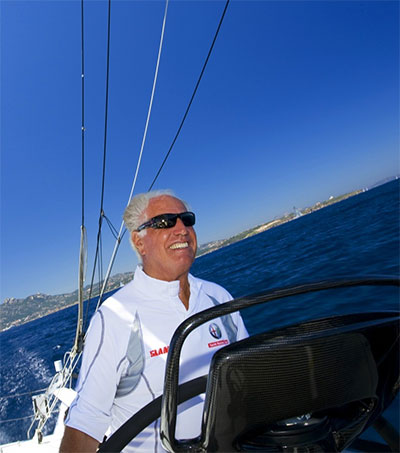 Neville Crichton Back at the Helm to Hobart

New Zealand-born businessman and sailor Neville Crichton, 72, will skipper this year’s Sydney to Hobart yacht race in perennial favourite and nine-time winner Wild Oats XI, the 2015 winner Comanche. Crichton, the founder of Alloy Yachts, has skipped the line honours winning yachts in the 2002 and 2009 ocean race.

Some 107 yachts, including a record 30 international entrants, will hit the starting lines of the bluewater classic this year, which begins with the cannon at 1.00pm on Boxing Day, 26 December.

Crichton returns to the race for the first time since his 2009 victory, when he vowed it would be his last Sydney-Hobart.

However, the millionaire car dealer confessed that he was unable to resist once Comanche’s owner, Jim Clark, made the boat available to him a month ago.

“The boat in any sort of breeze is clearly the fastest maxi in the world,” Crichton said.

“[Clark] and I were having a few wines in my trophy room at home and he said, ‘How do you get all these trophies?’ and I said, ‘Through a lot of work and a lot of racing’ and he said, ‘I want to have a trophy room’ … and that’s how it started, and he’s won a lot of trophies since he built the boat.

“I’ve been involved with Jim Clark all the way through, the boat was sitting here, it wasn’t going to be raced, so over a few glasses of wine and conversation we put a deal together to go racing.”

Crichton has not lost any of his combativeness during his eight-year absence from the race.

“It’s a challenge [to come back] and I want to win the race. We’ve got one of the best boats in the world, we’ve got as good a crew as you can put together. All we need is the right weather and a little bit of luck,” he said.