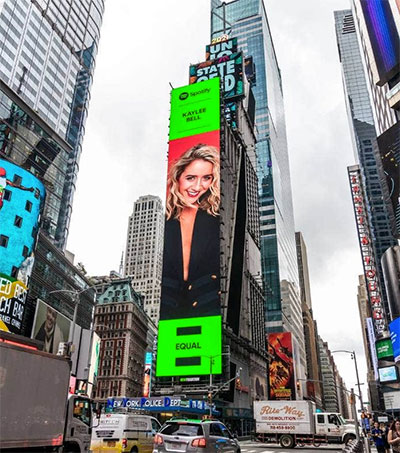 New Zealand country pop artist Kaylee Bell burst into tears when she was told her face is the cover of a new global playlist, Stuff’s Esther Ashby-Coventry reports, with Bell’s image plastered on a giant billboard screen in New York’s Times Square as part of the campaign.

The billboard is advertising the new Spotify playlist, Equal, with the former Waimate resident, now living in Auckland, selected to represent women musicians in New Zealand and Australia, Ashby-Coventry writes.

Bell’s distribution team contacted her to tell her of her new-found fame.

“I didn’t believe them at first,’’ Bell said.

She is working on finishing an album with her Los Angeles producer before the end of the year titled, Silver Linings – inspired by looking for the positivity in situations when they are extremely hard to find, Bell said.

Amongst other awards since, at 18, Bell won the New Zealand Golden Guitar Award.