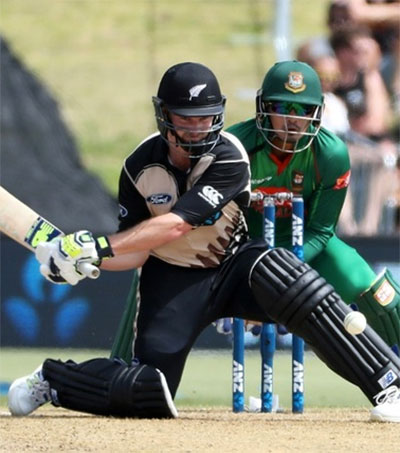 Left-handed batsman Colin Munro, 29, “produced a masterclass of controlled aggression to smash 101 off 54 balls as New Zealand coasted to a 47-run win in the second Twenty20 against Bangladesh” at Bay Oval in Mount Maunganui, AFP reports.

“The comprehensive victory gave New Zealand an unbeatable 2-0 lead in the three-match series, and follows their 3-0 sweep of the 50-over matches.

“With Munro in sublime form, hitting seven sixes and as many fours in his whirlwind innings, New Zealand posted a daunting 195-7.

Ashim Sunam reporting for the International Business Times said Munro was “a treat to watch”, asking whether the Kolkata Knight Riders might have made a “strategic blunder” in letting him go.

The third and final match in the series will be followed by Tests in Wellington and Christchurch.