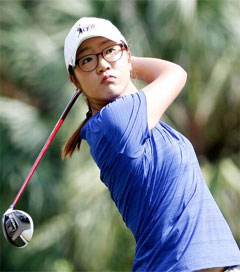 Much Good to Be Had from a Gift like Lydia’s

Winner of two LPGA tournaments already – but unable to collect any prize money because of her amateur status – Ko knew last autumn she had to make a dollars-and-sense move to pro status. She petitioned for early membership to the LPGA Tour.

“Being a professional and being an amateur is totally different, and I’ll have to learn a lot,” Ko said. “I need to play three or four weeks in a row and only a one-week break.”

Veterans may be annoyed by the youthful success and find reasons to criticise “kid” players, especially for deportment or perceived breaches in golf etiquette. A young player needs to be conversational during a round, but not too much so. She needs to be deferential in some ways, without giving away anything as a competitor. Ko has done all of this just as well as she’s done the actual golf part.

For a youngster who loves photography, wishes she could have a dog, and is still starstruck by golf luminaries such as Phil Mickelson, there is clearly much more good than bad resulting from this gift she has.

“I wish I could live like Lydia, just for one day,” her mother said, ‘because she always looks happy. She was born to be like this.”