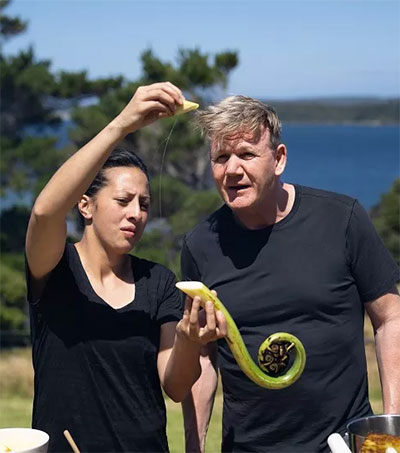 He’s been exploring the world while cooking for his new TV series on National Geographic, Olivia Wheeler reports for the Daily Mail. And during the second episode of the show, Gordon Ramsay, 52, travelled to the South Island to sample Māori cuisine with Wellington chef Monique Fiso.

During the episode, Ramsay went hunting to follow the tradition of Māori.

In one scene, the Mail reports, Ramsay shot dead a goat on a hill with a rifle-styled gun, he couldn’t stop swearing both before and after the hunting.

He later said: “My heart’s beating like Big Ben. Your adrenaline is pumping.

“This is not wrapped up in cling film on a supermarket shelf. This is proper outdoor hunting.”

Fiso’s food “clearly made an impression”, according to a Stuff article, written by Julie Eley.

“Monique [is] revolutionising that Māori DNA and not forgetting the history of why that incredible cuisine should be back on the map,” Ramsay told Stuff.

And it’s possible the two could be working together again soon, the news site reports.

“We’ve talked about some things we might do in the future together,” Fiso said.

Gordon Ramsay: Uncharted will air in New Zealand on the week beginning 12 August.