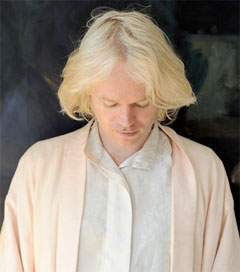 New Zealand musician Connan Mockasin is kicking off his UK tour in Glasgow on 22 January at King Tut’s promoting Caramel, ahead of the February release of his second single from the album, Do I Make You Feel Shy?

Caramel came out in November and has been highly praised by critics for its inventive and unique brand of mutated, lustrous soul.

This album is a sequel to his previous record, Forever Dolphin Love, as it starts from where the last album left off.

When describing the concept of the album he said he “wanted to make a record that sounded like a record called Caramel.”

When trying to describe his style of music he expressed that his music has an aquatic feel to it.

He said: “I grew up by the Pacific Ocean. I find the ocean really mysterious and maybe that is something that comes subconsciously through.”

Mockasin has teamed up with Sam Dust of dance-punk band Late of the Pier for his next album, Soft Hair.