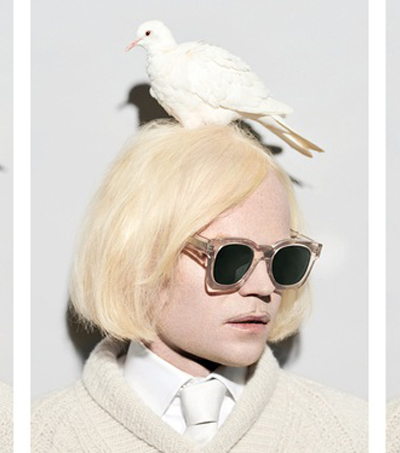 “The range of bold, geometric glasses picks up on the thread of statement-making frames that’s made Walker’s womenswear shades a success. Those women’s sunglasses, in fact, are so popular even LeBron James has worn them, a fact that partly inspired the designer to move into men’s styles.”

“It’s different enough that we felt we had to have a different range, but obviously there’s a continuity of voice and style,” Walker tells Vogue.

“As for the model for her debut men’s collection, it was Mockasin or bust,” according to the article.

“We liked the idea of creating a monument as you’d see on the streets of Paris or London, and the idea of taking an interesting man and turning him into a monument,” said Walker.

“When we thought of the men we would turn into monuments, Connan was at the top of the list . . . What I like about Connan’s style—his music, his ideas, his concepts, his own look—is that he doesn’t just run with the pack and run with the trends. He’s a modern icon, and he’s actually better than an icon.”

“Speaking to someone who just gets where I’m coming from, that was really nice,” said Mockasin, whose “next project is a five-part miniseries called Boston ’n Dobson that stars Mockasin as a male student confused for a girl by a music teacher, Mr. Boston.”