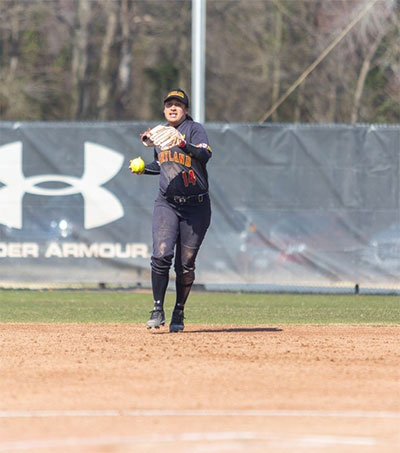 Infielder Mikayla Werahiko, 22, was apprehensive when New Zealand national team coach Kevin Gettins first suggested she go to the United States for softball, but she was willing to take a risk, so she decided to join the Buccaneers in Florida Southwestern State.

“What got me to push myself to move over to the States was that I had two other New Zealander girls with me,” Werahiko said. “If I struggled in school or in life I knew I would always have them there.”

Originally from Christchurch, Werahiko thrived over her two seasons with the Buccaneers. While adjusting to her new home, she hit .370, driving in 83 runs and stealing 92 bases, catching the attention of Maryland softball coach Julie Wright, who offered her a spot with the Terrapins.

In her one year of eligibility in College Park this season, Werahiko was a steady presence at shortstop in the Terps’ lineup, one of three players to play in every game.

“I thought I would have the two years and then go home,” Werahiko said. “When I came on my visit to Maryland, I spent the night with the girls on the team and they were welcoming and it felt like home.”

Werahiko’s development in the US has helped her improve her skills while playing for the New Zealand national team. Gettins named Werahiko to New Zealand’s preliminary roster for the 2018 Women’s Softball World Championships, which will take place in Japan in August.

“She’s got softball smarts,” Gettins said. “To top it all off, Mikayla’s a good person who fits in with the team very well and she’s competitive.”