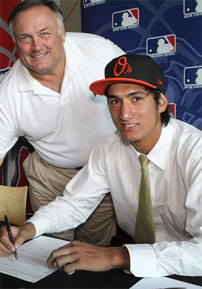 Seventeen-year-old first baseman Pita Rona is the first New Zealander to sign with an American Major League Baseball team. Auckland-born Rona has signed a seven-year deal with the Baltimore Orioles. Rona, who has played for the Black Sox, shifted his focus to baseball last year. Initially, Rona will report to Major League Baseball’s developmental academy in Australia. Top Orioles scouts David Stockstill said that Rona, who has been scouted by the Yankees and Red Sox in the past, had impressive “tools” in all five areas, and can turn into a top baseball player. “He has a very quick bat, a very quick swing and the ball jumps,” Stockstill said. His father, Brad, is also a prominent softball player in New Zealand and together they were the first father-son duo to play for the national team at the same time.