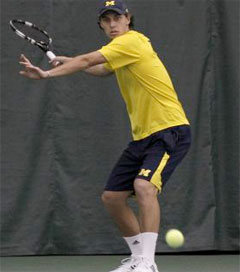 Christchurch-born Barrett Franks, 21, is playing the “best tennis of his collegiate career” for the University of Michigan. Franks’ talent was widely known in New Zealand. Such talent earned him a spot on the nation’s junior Davis Cup squad. Michigan coach Bruce Berque reached out to Franks purely based off online results. Franks has become known to Berque as a “relentless competitor.” Currently, Franks has the second-most dual-match wins this season. Franks is a former student of Shirley Boys’ High School.