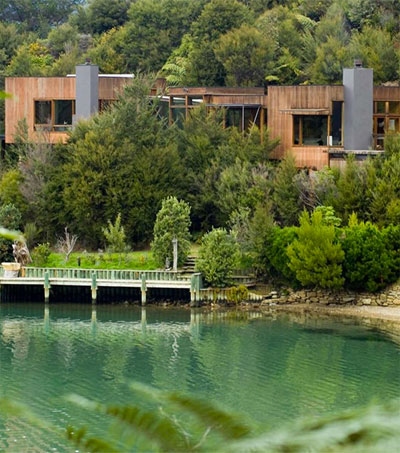 Top New Zealand-born cinematographer has worked with Alan Parker, Mickey Rourke, and Ryan Gosling, but his holiday house at Waterfall Bay in the Marlborough Sounds is far from the hustle of Hollywood, writes Michella Jana Chang for Condé Nast Traveller.

In 1989, Seresin bought 75 acres on the inner Queen Charlotte Sounds. On this plot, dotted with cabins and campsites once used by holidaymakers there was also an old house – among hills thickly forested with native tree ferns and manuka.

Seresin used that house for 10 years – “it was simple but I loved it” – but then decided to embark on designing a new home. Seresin employed an Auckland architect, Pete Bossley, who came up with plans for a sensational, stilted, split-level house of recycled wood and glass – a kind of all natural Fallingwater.

“Light drove a lot of what we did,” says Seresin, a man whose professional work is dominated by the same element.

The best way to arrive at Waterfall Bay is by boat, a 10-minute ride by water taxi from Picton. The house emerges, its wooden corners, graphic edges and watery reflections peeping through the trees.

Seresin’s days at the house are spent on the business of his vineyard, which now produces more than half a million bottles of biodynamic wine a year, something he is proud of.

“I want to pick a bunch of grapes without having to wash it first. If you can grow grapes without chemicals, why not? Back at the house I’ll check on the buildings, source trees to cut down for firewood and visit the beehives. It’s not like spending 14 hours on a film set, but I do have to make sure everything’s working as the property is often unoccupied.”

Although it may not be for much longer. Seresin is opening up Waterfall Bay to rent.

“It’s a place that really needs to be lived in,” he says. “You do need imagination if you come here. It’s your own little world, to get away from things, a real New Zealand experience.”