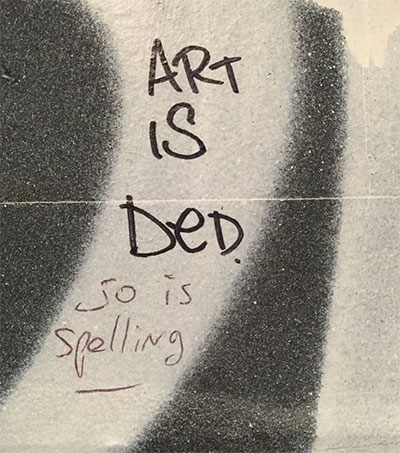 “I like bathroom graffiti because it is one of the only places people can say their deepest darkest thoughts without fear of repercussions,” Kelly, who works in advertising, told Chaudhuri. “It means messages on bathrooms walls can be so confronting and brutal. I think public bathroom walls are an under-appreciated but very rich source of insights.” Almost like modern-day cave paintings, Chaudhuri writes.

Since 2016, Kelly and his friend Shakira Twigden have documented scribbles in public bathrooms around the British capital, analysing and cataloguing their findings into the suitably-named Toilet Study. “We visited 100 public bathrooms in London. We would photograph every piece of graffiti we could find and from there, the messages were analysed for their multiple data points. Everything from, how often the word love was used, to the sentiment of the messages. The insights presented in the study are a result of the findings uncovered from these data points.”

In all the messages they analysed, the women were more supportive of each other and left messages of solidarity whereas, from the looks of it, men just want to watch the world burn. “The most interesting insight for me was just how differently men spoke to men and women spoke to women,” Kelly says. “Women, on the whole, were generally more positive and left uplifting messages. Motivational comments or messages of love. Whereas men tended to be aggressive and threatening, both about their fellow sex and the opposite sex.”