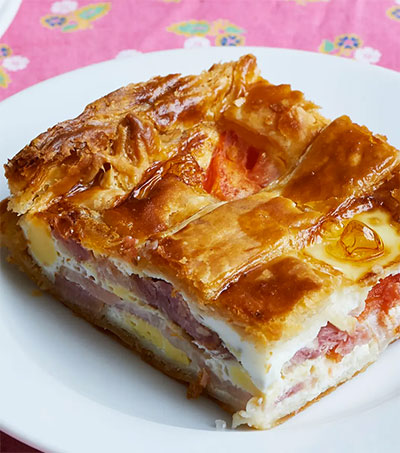 “This pie feels as if it is too simple to work – but it does and very easily,” according to London-based chef and caterer Margot Henderson, who dishes up her bacon-and-egg-pie recipe to Guardian readers.

“This is an old-school pie from New Zealand; you are not a proper mother there if you don’t pack your kids off with a bacon-and-egg pie for their sports day,” Henderson writes for the newspaper. “I found it was also very successful on a cold, sandy bank in Scotland after the children had spent a night camping. I think their camping involved running around all night and not sleeping, starving because they had eaten all their sausages very early on, so I was ‘top mum’ for arriving with a warm bacon-and-egg pie. It feels as if it won’t work, but it does and very easily. Peas can be added – it’s always good to get a bit of green in.”

Henderson is chef/co-owner of Rochelle Canteen.