After completing the 3000km Tour Aotearoa bike tour in late February 2020, England-born artist and graphic designer Tom Napper decided to wait out what he thought would be a quick closure in New Zealand. But the coronavirus pandemic, which slammed New Zealand’s borders shut indefinitely the day before he was supposed to fly back to London, changed Napper’s plans – and his life, Lilit Marcus reports for CNN.

On the organised tour participants are asked to take photos of each stop along the way to confirm that they’re following the route, but Napper asked for and got permission to do his visual check-ins as illustrations instead. Little did he know that these paintings would turn into a long-term project.

His initial 30 days have now turned into 15 months and counting, and the 30 paintings of stops along the bike route have become a long-term project to document all the places he has visited in New Zealand.

“I don’t think I’ve been bored once in the last 14 months,” Napper says. “Doing the paintings has been just a huge anchor for me.” 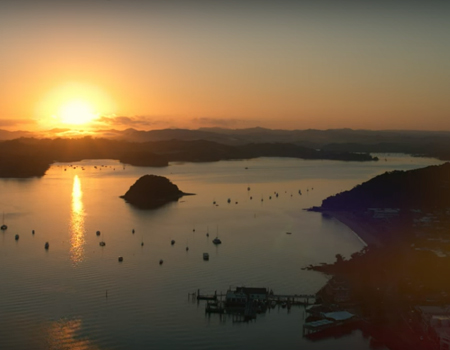 Actors Joe Naufahu & Jayden Daniels were challenged to do ten awesome things in the Bay of Islands in one weekend. See how many they ticked…